By way of introduction : a community music made of karaoke and chorus

Working currently for Telecommunication operator Orange as a digital marketer, I discovered thanx to a workmate of mine (thanx Céline Mounier!) a nice service of community music called e-Jam. 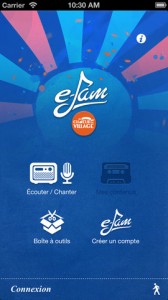 In a nutshell, e-jam is a web or iPhone/iPad application combining  choral and karaoke features. Indeed anyone can use the application to learn songs and to train to sing them. Once the song is known, any user (a user is called an e-jammer) can make his or her own record and use other e-jammers’ records to create an e-chorale of a given song. You can set up  4, 8 or even 15 member-chorals.

A closer focus on the web service

The web application is a website. Features of the service are organized within three main tabs. A tab Chansons’ (songs), a tab entitled Jams and the last but not the least tab called Chorales (chorus) or Mozaiques. Each of these tabs offer a key feature of the service, respectively karaoke, recording functionality (record is called a e-jam) and chorus creation from available e-jams . 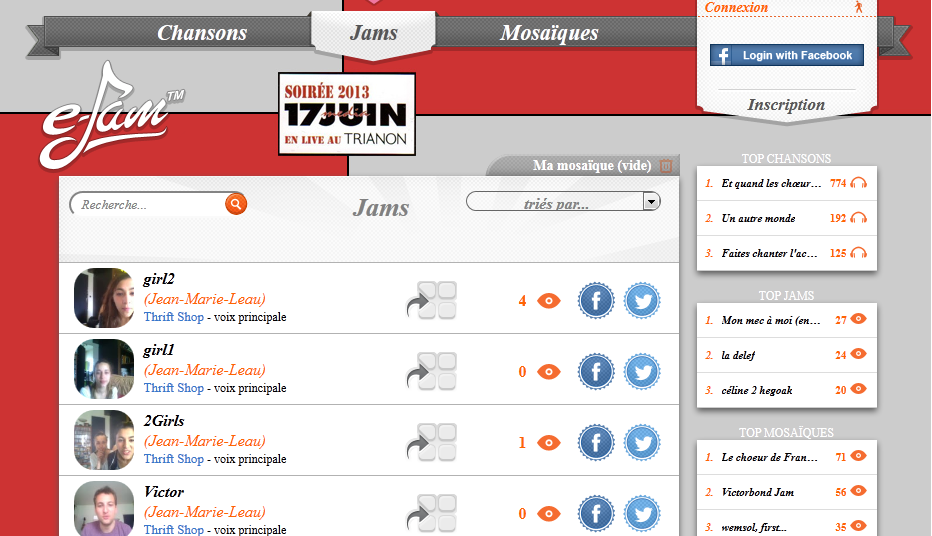 The “Chansons” tab offers a catalogue of songs. Users can learn them watching coaching video in which a vocal coach sings for them and lead rehearsals. No need to have created a full account to enjoy this part of the service. The second tab is dedicated to recording (the jams). Once a given song is known, the user can use a webcam and a mike to record him or herself. If you are not completely at ease with a given song, you can sing using the coach video. In this case, to provide best quality, using a headset when recording is a good way to hide the coach voice from your own record. Several tunes are available. So high and lows voices can select which one is the more appropriate . A user can keep his or her records private. Of course, it is more fun to make them public. Like this, any e-jammer can select, amongst all the available public jams, which ones he or she will select and use to set up customized chorals. Numbers of views of every public jam is available and  you can build a basket of jams without being obliged to use them immediately.

moderation is done in e-Jam

Jams are not obviously available immediately. Moderation is done to sift and eliminate attempts to publish unmoral messages or sexual explicit contents. You can vote for jams you like.

In the third tab entitled “Chorales”, e-jammer can create chorales selecting up to 15 different e-jams in public ones. Drag and drop the ejams that interest you , and that is it ! Your e-choral is ready to perform ! Of course you can also vote for a given e-choral.

Search and filtering features (ages, size of the chorals) are also offered. Like this, you can also find all the chorals your jams have been used for. Moreover you can find a top of jams, top e-jammers and top chorals and songs in a transversal vertical sidebar on the right side of the service page. You can also find sharing features (both facebook and twitter buttons). For every object (e-jams, chorals), the number of views is indicated.

The birth of this community music application

This application was made possible thanks to will and energy of several persons.  First Jean-Marie LEAU, a well known French composer had the idea of that community music application.  Jean-Marie LEAU is also choral director (Les voisins du dessus) and he wanted to develop a tool which could enable people to share and  repertoire or to build a “village spirit” around some songs and repertoires.

Laurent Angeli (webmaster of Les voisins du dessus) and software programmer started building a first release of a web service. In this first version,  an e-choral could be made of up to a maximum of 4 members. Meanwhile the idea worked  its way  in the very choral. Céline Mounier who is soprano in les Voisins du dessus found the service great. Working in Orange she shared the project to her team, found a budget toindustrialize the first version and worked as a project manager for e-jam. The main objective for a second release was to use more than 4 different voices to build an e-choral. In this context, an Orange R&D team located in Caen has developed the core of the service : the possibility to pile up 15 different records (e-jams). Tough it seems trivial, compiling up to 15 different voices for creating an e-choral was a true challenge. Orange R&D has succeeded in coping it by leveraging an Orange technology used for conference call ! Once the very technical engine was fully workable, R&D developed a raw web service. The mobile agency Big5media thus skinned the service and developed an iOS application.

Was not it a nice story ?  I hope the service will bring chorus fun and passion to many a internet user ! It is well started as the French start-up eJam developping the eponym service has attracted great music names : Christophe PIOT (chairman of Allright Music that publishes e.g. French DJ David Guetta) has taken a stake of eJam’s capital…

to learn more on e-jams :

“Community music: focus on e-Jam a French virtual choral application” by Ramzi SAIDANI in under terms and conditions of the licence Creative Commons Attribution 3.0 France