Subtitles are quite recent in the opera houses

When you don’t know well an opera, it’s often difficult to understand the plot. In this unique musical genre, it is true that sometimes the libretto is not crystal clear. Reading the synopsis (a dedicated term for summary in the opera or in the theatre) could be of help. Yet it remains frustrating not to understand precisely the text or to be unable to seize all the poetry of operatic sentences. The solution ? To bring a booklet and read the texts in the auditorium ?  Ok it could be done but you need to bring a torch as well. That was done for years by a lot of music-lovers or newcomers. Indeed viewers had indeed to wait the early 80’s to benefit a major improvement for better understanding the plot :  the so-called opera surtitles or opera subtitles come into the spotlight ! You may find it surprising but this feature is only 30 years old in the field of opera, contrary to the movies theatres.

Lotfollah Mansouri was the first opera director to offer subtiles

Indeed opera subtitles were first used in Canada in 1983, thanks to the fabulous work achieved by the Iranian-born opera director and manager Lotfollah Mansouri aka “Lotfi Mansouri” (15 June 1929 – 30 August 2013). He was General Director of the Canadian Opera Company and of later the director of the San Francisco Opera. He had the genious idea to project opera subtitles on the proscenium (part of the stage that is above the stage) allowing the audience to follow the libretto during the performance. Since them, many an opera house in the World has its own huge screen on the top of the proscenium. See for instance below what is used in these two Paris-based opera houses : Opera Bastille or Opera Comique (also known as Salle Favart). 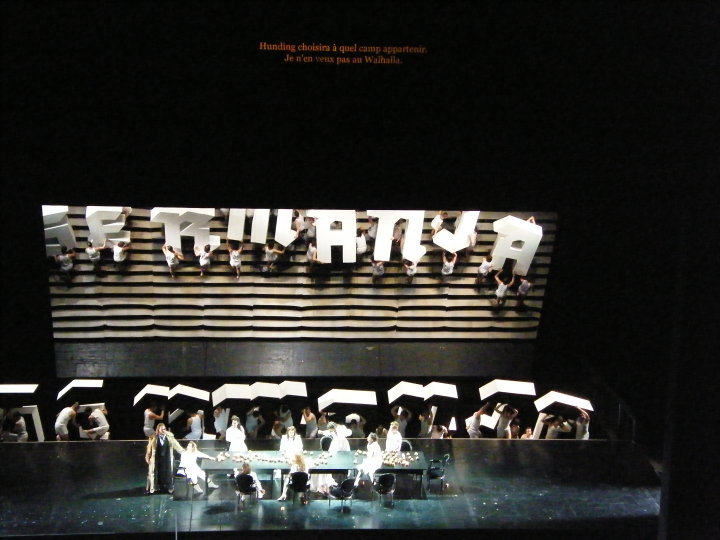 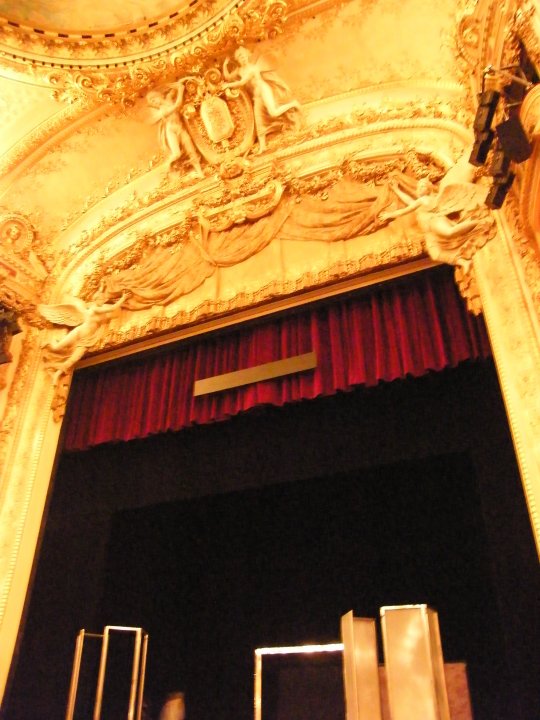 A nice move but with still with some minor drawbacks !

For sure you are a lucky one if you have a seat at the parterre, but you may get a stiff neck watching up and down. The screens where opera surtitles are displayed are indeed located very high from the floor. To offset this drawback, some smaller screens are sometimes installed on the back sides of the auditorium (like in Opera de Lille or Théâtre du Châtelet). 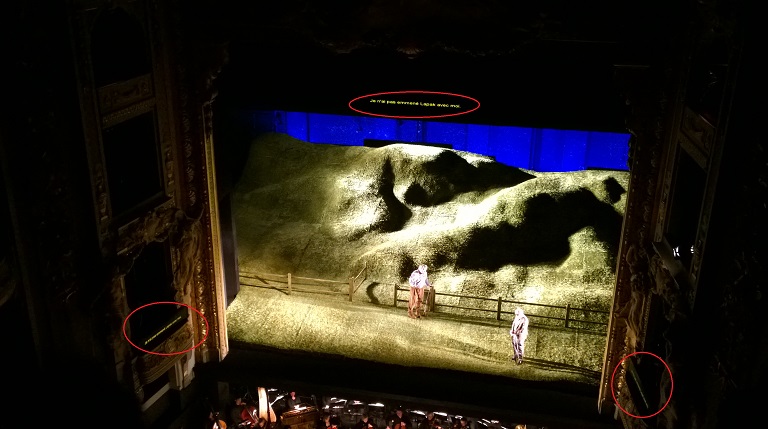 Main screen and side screens in Opera de Lille

That’s make subtitles accessible to a larger number of viewers and prevent floor audience from having a stiff neck. It a good point for the necks of holders of superior categories but also for those having a seat below a superior floor (a balcony for instance) where supertitles aren’t visible. The second problem with this kind of opera surtitles is that they can be a distraction, by focusing attention on the titles instead of the stage. Indeed the main drawback of projected titles or translations is that they cannot be switched off and can occupy a large part especially if there are displayed in several languages (local language and more often English). Another drawback is that you cannot choose the language of the subtitles. In bilingual countries such as Belgium you will have to cope with two blocks of texts : one in French and one in Dutch. Languages can be a touchy question so the position of languages alternates according to the acts ! If the French block is displayed on the left position  in an act, it will be put on the right in the following act as illustrated by the following pictures taken in Opera de la Monnaie (Bruxelles) during a performance of Enescu’s Oedipe 🙂 !

Therefore several systems have been developed to provide captions visible only to those individual viewers who wish to see them. To my mind, the best system should offer let us get the subtitles within a hand reach, more often located on the back of the seat immediately ahead. That the experience provided by so-called electronic libretto system. It uses individual screens placed in front of each seat allowing patrons either to view a translation or to switch them off during a performance. New-York  Famous New-Yorl based Metropolitan Opera became the first opera house in the USA to use this technology. In Europe, The Vienna State Opera  (Wiener Staatsoper) was the first opera house to use such a system (see picture below). Generally, the number of different languages offered by electronic libretto system amounts to 2 ou 3 at maximum : one or 2 vernacular languages (like in Belgium French and Dutch) and almost every time English as Lingua Franca ! 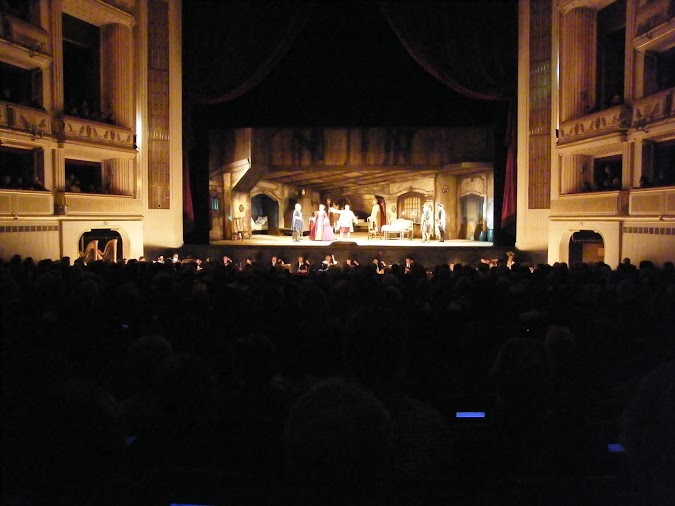 During the X-mas period, my wife and I went to Berlin for an operatic week-end. We saw a production of Hänsel und Gretel in the Komisch Oper. Feel free to have a look at the teaser of this opera by Humperdinck. The very performance of Hänsel und Gretel was a great surprise : nice voices, good acting, original and colored stage direction ! We have enjoyed a marvelous moment that evening ! 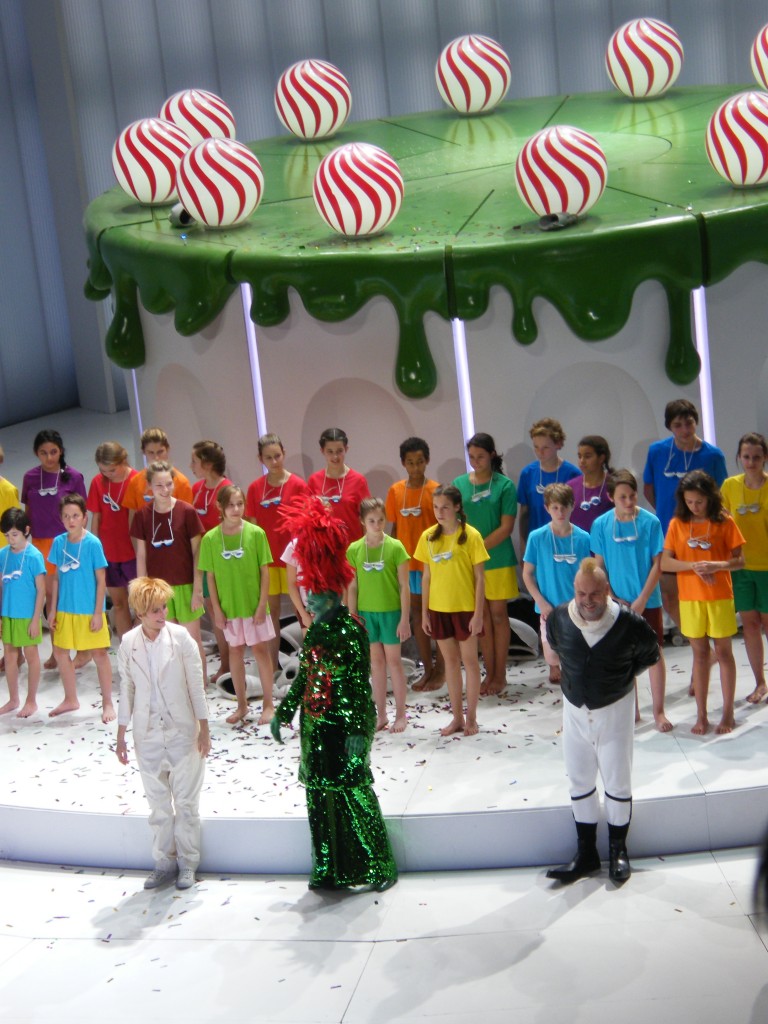 Located very close to the very famous street ‘Unter den Linden’, the Komische Oper is the third Berlin Opera house. It was built in between 1891 and 1892 and was inaugurated on September 1892. The auditorium underwent further revamping in 1986 while the stage technology was updated three years later. Nowadays the theatre can provide a seat to 1270 lucky patrons. 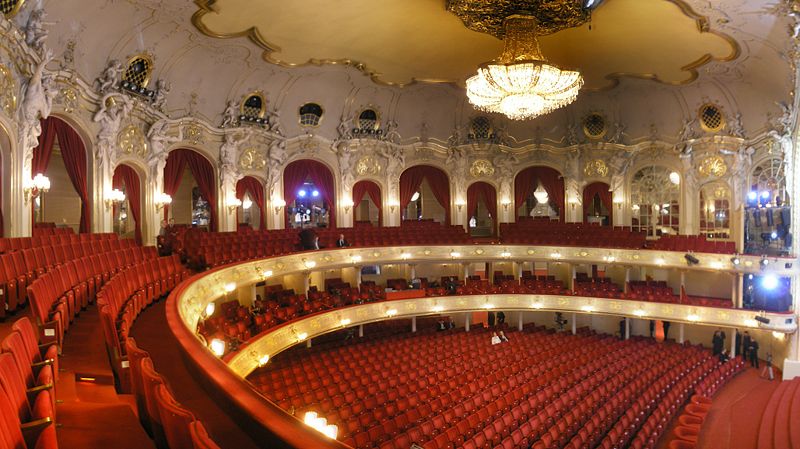 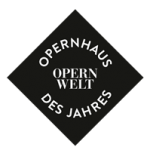 Besides, note that the Komische Oper Berlin has been awarded the prize of “Opera house of the Year” in October 2013 by an assembly of 50 journalists from all over the world. To celebrate that, special biscuits were offered to patrons ! they were delicious but it’s not the point ! If I want to focus today on this opera house, it because of its top-of-the notch electronic libretto system !

I attended a lot of performances in opera houses all around the world, but never did I find a subtitle system that was so enhanced ! On the back of the seat ahead of us, we found a screen, more exactly a glass ribbon on which we could read the plot. 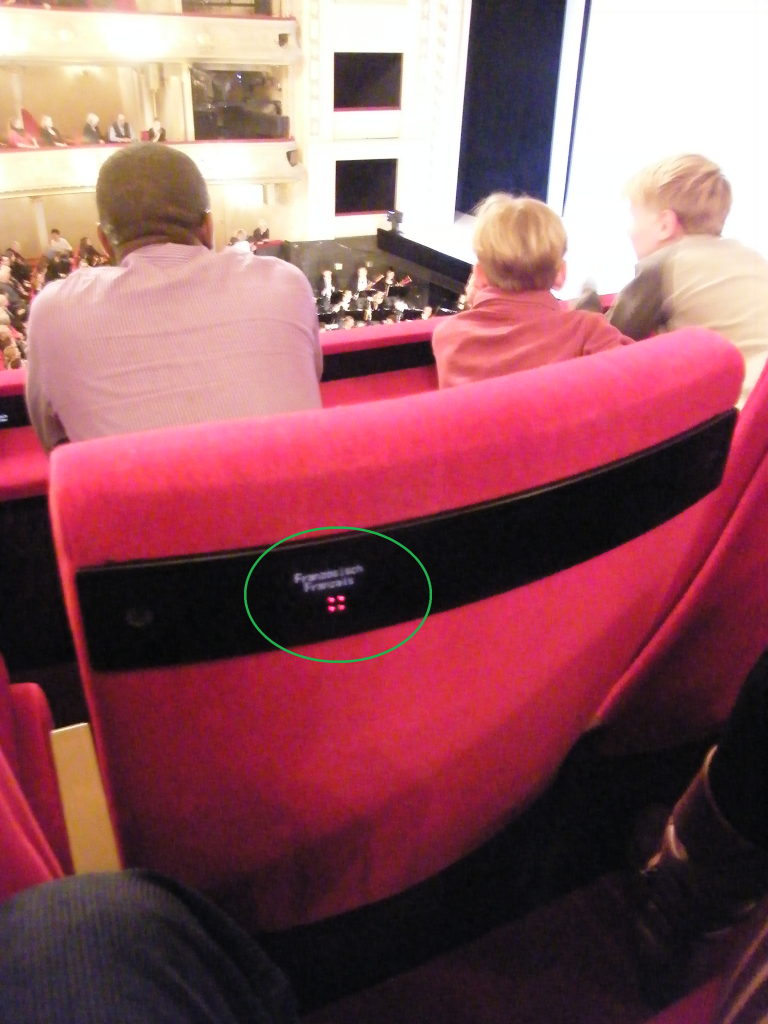 As shows below, four distinct languages are offered :  German, Turkish, French and English !!! 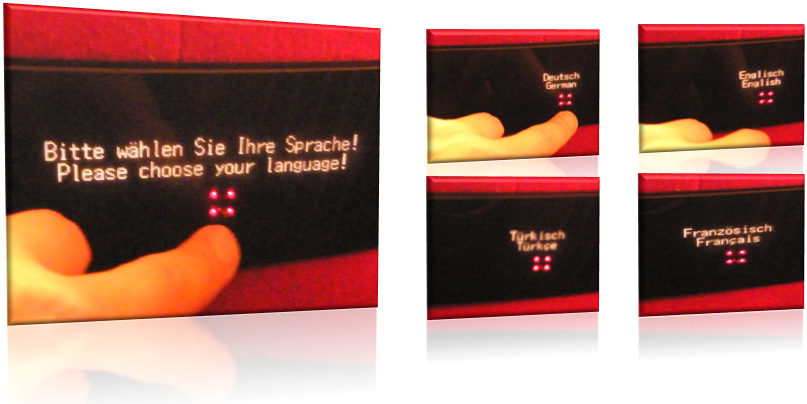 language menue in the libretto electronic system of the Komische oper

Once chosen your language, you can easily read the translation in the selected language while listening and watching what was going on stage. Despite our speaking and understanding English quite well, we enjoyed greatly reading translation directly in French language. We would not have been able to seize all the mischief of the fairy tale in English as precisely as in French ! It was also a pleasure to switch the system off when you want ! 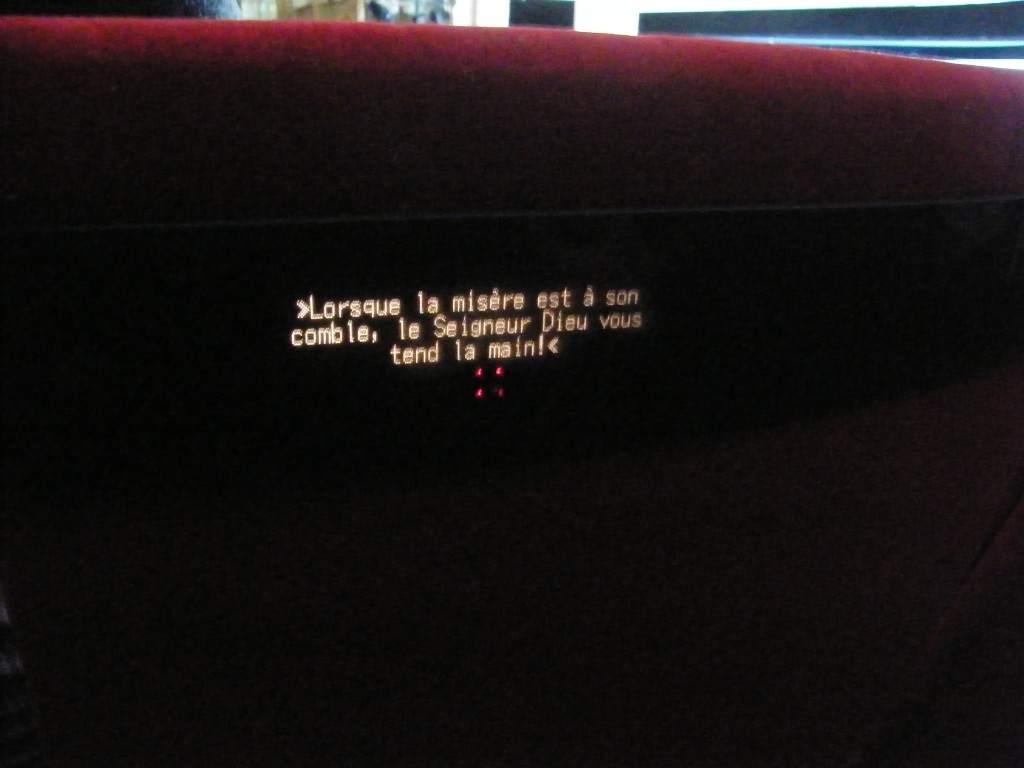 We really did enjoy this Hänsel & Gretel. After that marvelous evening, we ended up singing the Famous Dance Duett “Brüderchen, komm, tanz’ mit mir“ and drinking hot beverage (glühwein and hot chocolate) the Gendarmenmarkt X-mas market very near from the Komische Oper.

“Access to culture: opera subtitles help!” by Ramzi SAIDANI is under terms and conditions of the licence Creative Commons Attribution 3.0 France