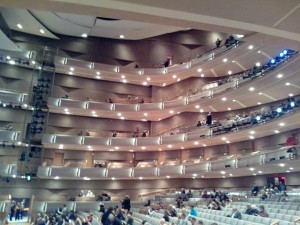 Toronto’s opera company might be regarded as one of the best in North America. When Gerard Mortier proposed names of directors who could be the best for the Teatro Real de Madrid, Alexander Neef, General Director of the Canadian Opera, was among them. They actually worked together at the Opéra National de Paris between 2004 and 2008.

I discovered Patrica Racette’s Madama Butterfly during a HD live broadcast from the Met and I decided to go to see her when possible (at the Liceu last year). I can’t imagine a better soprano for this part. 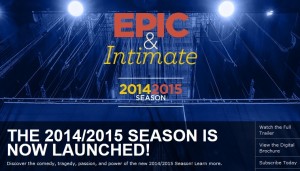 I am not convinced by Dimitri Tcherniakov’s complicated rewriting of Don Giovanni, already seen on French TV from Aix Festival. But it could be more adequate from the opera house than from a TV screen.
I’ve been to the Canadian Opera Company only once, as I live in Europe. I now think that they are only good reasons to go. The staff is friendly and helpful. Frankly that’s a big difference with other houses I won’t name.
There are many free concerts and dance performances in the Richard Bradshaw Amphitheatre (actually the main stairs with view on the city).

It has been the first company in the world to use surtitles like in the movies theatre : even when you don’t understand Italian or German, you don’t have to read the plot before the performance.

Subscriptions are a good way to get the best seats at low price. I actually bought a subscription ticket from a lady whose husband was sick and could not come that evening. I sat at the orchestra near the stage for only $40.
My night at the Canadian Opera Company was one of the highlights of my trip to Canada. Magics of opera !

“Canadian Opera Company: the 2014-2015 season #COC1415” by Anh Tuan Nguyen is under terms and conditions of the licence Creative Commons Attribution 3.0 France