The exceptional Italian mezzo-soprano Cecilia Bartoli has been granted critics raving and opera lovers rushing to her concerts and opera performances since the debut of her faboulous career in the mid-1980s. Each of her albums  sells at least 400 000 !

Why ? Cecilia Bartoli is a unique artist in the world of classical music.

She got used to racking up incredible record sales for a classical singer. Have a look on the following graph indicating how important sales of some of her CD albums are ! Imagine more than 900 000 copies worldwide of her 1999’s Vivaldi Album have been sold. 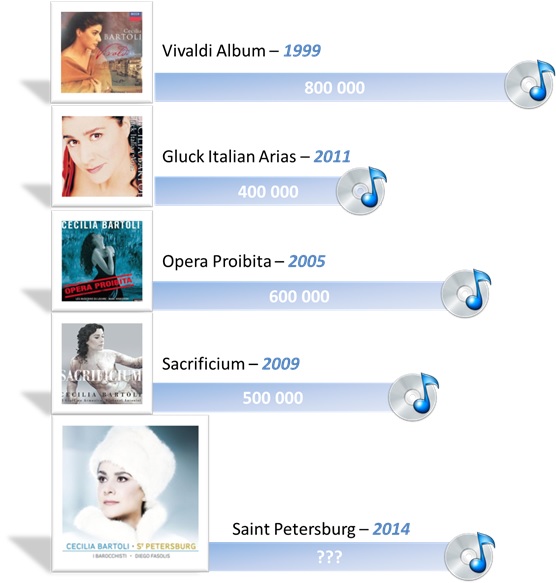 Despite unknown composers such Dall’Oglio, Raupach or Araja as I’m sure Cecilia will  rock the charts :). Let’s bet that for Cecilia Bartoli Saint Petersburg album will do as well as Vivaldi !

“Cecilia Bartoli Saint Petersburg : a new record for that record ?” by Ramzi SAIDANI  is under terms and conditions of the licence Creative Commons Attribution 3.0 France