To buzz and foster expectations around its Google glass, the firm of MoutainView (it is not a joke !) involved its fans a few months ago thanx to #ifihadglass. #ifihadglass is the official hashtag and the name of the eponym viral marketing campaign run by Google in several social networks (Google + & Twitter). Its main goal is to select  the happy fews from normal guys like you and me who will have the privilege to get the first available pairs of Google glass. Well,  it is certainly not a gift, because the happy winners will just be allowed to pay US $ 1500 for the google glass  before the others. It is the price to pay to show-off as an early  adopter…This campaign #ifihadglass, to be more concrete, is also above all the evidence that large companies of which Internet giants companies believe in ‘crowdsourcing’.

The crowd…what ? What is crowdsourcing ?

Here is Wikipedia definition of crowdsourcing. “Crowdsourcing is, according to the Merriam-Webster Dictionary, the practice of obtaining needed services, ideas, or content by soliciting contributions from a large group of people, and especially from an online community, rather than from traditional employees or suppliers“. Crowdsourcing  can occur both online and offline,  by joining good ideas, creativity, intelligence or know-how of volunteers, fans or even customers, where each one on their own initiative adds a small portion that combines into a greater result. In some way, crowdsourcing is a king of generalization of the “Suggestion box” used by some companies to gather both input & ideas.

Let’s come back to Google, gathering all these ideas coming from overheated brain of thousands of participants, the Internet Giant could detect and thus address usages that all its marketing surveys (whether they be excellent) would not have spot.

Sure I am digital marketer that is for stage right. Still I am also an opera nut  that’s the stage left! So I yielded to temptation of crowdsourcing and imagined what I could ideally experience from the Googleglass if I had the chance to rank amongst the happy fews to be allowed to pay 1500 bucks for the ‘precious’: if i had google glass, I would use them to quench my passion for opera ! By waving a magic glass… 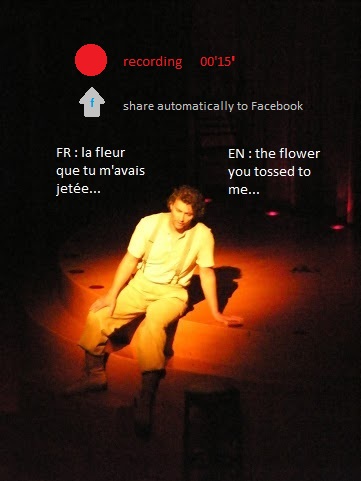 If I had Google glass, first, I would them to improve my experience of supertitles by using a integrated supertitle system. Indeed, generally projected above the theatre’s proscenium arch or more seldom on either side of the stage, supertitles are sometimes not correctly accessible, leaving “good memories” such as stiff necks or unforgivable views on bald heads of spectators ahead of you !  Their main drawback is that substitles are seldom in the same field of vision as the stage.  Thanks to the Google glass, surtitles will be displayed in real time in my direct field of vision, I won’t have to trade-off between words and stage if I do not know by heart an opera (for rare languages such as Czech or Latine it could be of great help !). And in case I know very well an opera, I could use my google glass to display no longer the translation but the very score of the voice part. Scores would scroll in the air in the way of a karaoke. As I am far from having an absolute pitch It could enhance my music lover experience.Second, on demand, I could also get information of performers, characters or roles. I could for instance know how many times a singer has sung a given role. Every thing would be done of course without having to speak but just by making a pre-programmed gesture and by relying on facial and vocal recognitions. Those mechanisms would act as a kind of ‘Shazam’ or a ‘Gracenote’ of Lyric performers and would be able to distance query using wireless networks.

Regarding social networks, I imagine what Google Glass could enable me to vote immediately after an aria. I would also be eager to record my heart pulses during some arias. Like this, I would be able to build some feeling maps that I could share with my opera friend. I could use these maps to build a year top 10 of my more intense musical orgasms.

Finally, as I am an afficionado of pictures often taken surreptitiously because taking photographies is forbidden in many an opera houses, I will use them to take snapshots or record my favorite singers and operas !

An opportunity for live performing arts ?

Ouch, ouch, copyright ? Are opera houses going to prevent opera goers from touching velvet of seats because they wear Google glass, i-watch or other connected-jackets stuffed with microphones or micro-camrecorders capable of sending directly images, video and sound to the Cloud ? Nowadays, we are far from the recorder hidden in a mailman bag (if that does not speak to you, I invite you to discover Diva, the marvelous film of French Film maker Jean-Jacques Beineix).

Digital technologies have already upset recording music industry, but experience of live arts could also be revolutionized by digital. Having a second screen experience becomes more and more common, everybody has a digital camera in his or her pocket. In pop music concerts, blue-shaded phone screens have replaced flickering flames of lighters…Everybody has a smartphone and it has never been so easy to record sounds and videos and to share them. How could theatres prevent spectators from taking over the performance they come to listen or to see? Is this fight illusionary ?

Digital is perhaps more an opportunity than a threat for live arts especially when it comes to performing ones. Indeed digital revolution gives them more value at the expense of recorded music which has been commoditized. As a consequence, recorded music has been losing a large part of both its perceived and commercial values.

We have a vital need to share what stirs us. It is so frustrating to seize happiness moments and not to be able to share them with our communities. Live is already magic. Enhanced, it will triumph as a more and more sought-after experience.

“If I had google glass, I woud use them in the Opera House” by Ramzi SAIDANI in under terms and conditions of the licence Creative Commons Attribution 3.0 France.