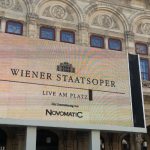 Der Fliegende Holländer was broadcast live from the Wiener Staatsoper on 09 May 2013. As this Wagner’s first major opera lasts 2 hours and halfstill with no intermission, I traded off between a standing place inside or a seating place outside in the Herbert von Karajan Square where the Opera House’s located. Indeed this broadcast is part of Live Opera programm held in the Square Herbert von Karajan. You can find detailed program on Vienna major touristic sites such as  events.wien.info or on Wiener Staatsoper’s website

I preferred this time to feel what the atmosphere could be outside. As I arrived late to line  I had no chance to get any standing place in the stalls. 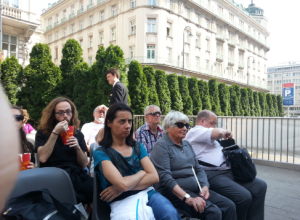 After the web to stop, the screen-to-shop

First I was amazd to see some official ‘billeteurs’ (I like so much this word used in Austria not only because of its having French Origin but also its sounding so cute). They were selling the program or just the casting information sheet to people installed in front of the screen. I was surprised to see than more than a dozen of onlookers (you loyal servant included) gave around 4 euros to get a program. People had a look on synopsis and cast as if they were a few meters ahead inside the very building. 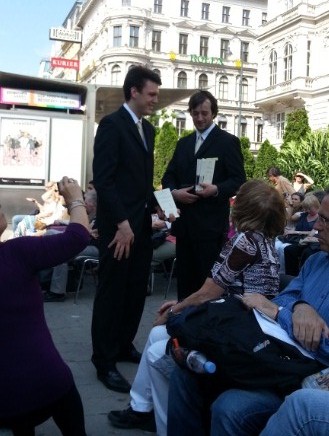 Before the performance, of course not surprisingly sponsors advertisements and messages were done like in a movies theatre. Sponsors’ presence does exist inside but it is more discrete as it is mainly attached to paper communication (program, performance and tickets posters). 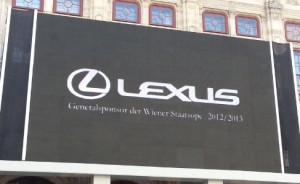 Then some images of opera house let you imagine what is inside. Red velvet, white and gilded woods, loggias, paints, grand stairs, all that can foster imagination and nourish the magics of an opera house is shown in order to draw attention, develop interest and create desire to step inside. 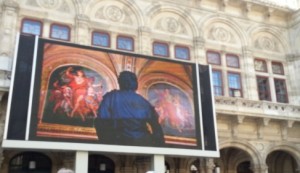 After that, both website and mobile application of the Wiener Staatsoper were promoted in English to reach the largest audience. To top it all off  worlwide diva Anna Netrebko (love) and largely known beyond opera lovers circle wished us a nice operatic experience. What’s else ?

Oh by the way, the sound was correct, the image good. Of course it was noisy and you could be disturbed by curious onlookers or unstopped stream of tourists. You can experience the atmosphere watching this short video I shot there.

At the end, many a spectator applaused as if he or she had been enjoying the performance inside.

Thinking about that, this live opera program was plenty of cross-channel tactics, isn’t it! The consultant side of my soul would not be damned for that 🙂 !

Wiener Staatsoper Live Operas : a peep at some cross-channel tactics by Ramzi SAIDANI in under terms and conditions of the licence Creative Commons Attribution 3.0 France.