I have already written some posts about how digital can enhance a live performance providing a dedicated experience before and after the show. Proposing to complement experience during the very peformance in the venue  is even rarer. I have heard about a opera for kids performance in Nice where the audience could augment with their smartphone the plot of the opera  Peter Pan they were watching.  I knew another experience where audience could enjoy a Stephen Goss’ tablet-powered piano concerto played by the piano soloist Emmanuel Despax !
However these two experiences were specific to the show. As far as I know, no universal solution is available to augment any kind of classical music experience. It seems it no longer the case. In the last Classical:Next event in May 2018 in Rotterdam, I have discoverd a project called onestage application. Its goal is to augment the performance in the very venue giving the audience access to  a bundle of features through their smartphone. The solution could be used by any venue whatever the nature of the show. All this can happen thanks to an application that viewers have to install on their smartphone for the performance. The venue has also to be equipped with at least a bunch of four camrecorders and a wifi network. The application is free of charge for the viewers that use it. It is the venue that pays for the service provided by onstage experience. 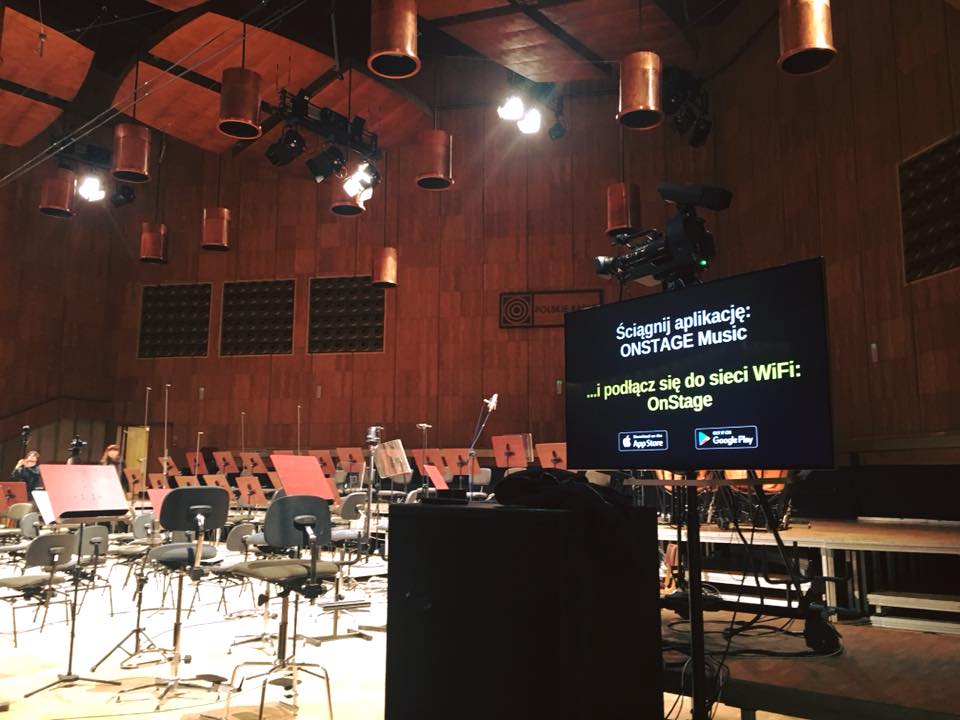 onstage application the missing digital link between “before” and “after” performance ?

The onstage application provides before and after performance features. For instance,  after the performance (or during the intermission by the way), bonus content from behind the scenes are proposed to the audience. Before the performance, viewers can prepare their listening by reading digital concert notes and artists’ bios and also prepare their getting to the venue on time using location services embedded in the app. 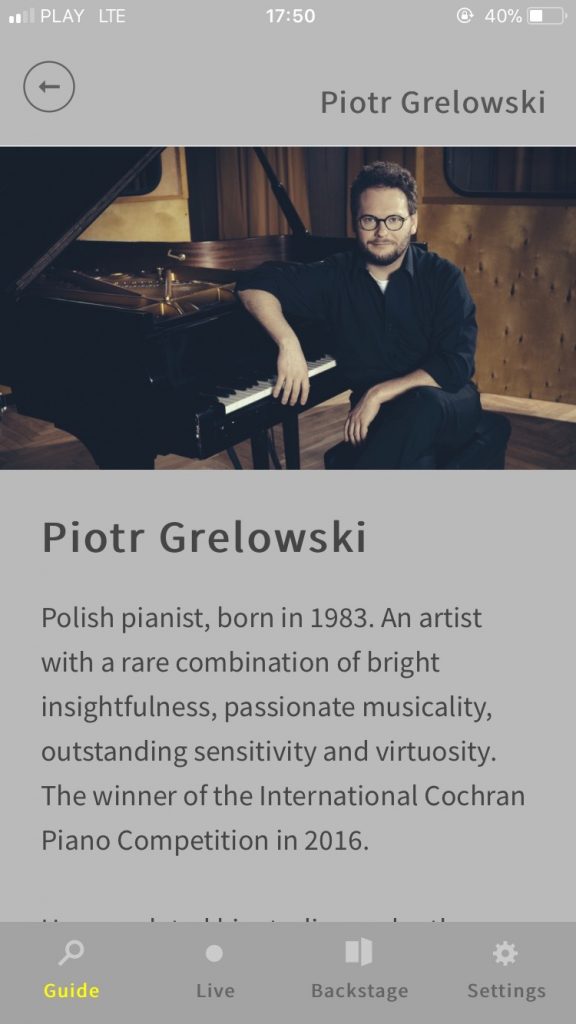 The onstage application enables also the viewers to send emails directly to the artists after the performance. The app also enables the audience to revive the emotions of the concert by re-watching the performances within the application.

Still, to my mind this is not the most interesting value proposition of the onstage application. The most exciting features are related to what is done in the very venue during the performance. Once in the venue, the viewers can indeed enjoy several experiences if the concert hall or the auditorium of the opera house has been powered with the relevant camrecording equipment and a wifi network. The idea of experiencing a live performance using a smartphone in the venue might sound as impossible for many a conservative concert hall.  However for digital natives, it may not be so iconoclastic and can provide a lever of experience into the world of real and live music they are looking for.

Amongst the” in the venue features” , first of all, viewers can enjoy close-ups of the performers in real time during the event. It is possible to watch the artists from various close-up angles in the smartphone (in real time). Onstage application streams video only and the audio enjoyed by the user of the app  always remains acoustic. Anybody can imagine the pleasure to zoom on the conductor or on the hands of a piano soloist ! Of course, this kind of feature is not new in the field of classical music. Choosing a viewpoint is regularly proposed in watching recorded performance. Have a look on the Opera Machine where viewers could chose their view within not less than 17 different camcorders !  In the staatoperlive service of the Wiener Staatsoper it is also possible to choose between 2 viewpoints when watching a opera live stream at home. However in the onstage application experience you can chose 4 different points of view during the live performance in the very venue in your smartphone. 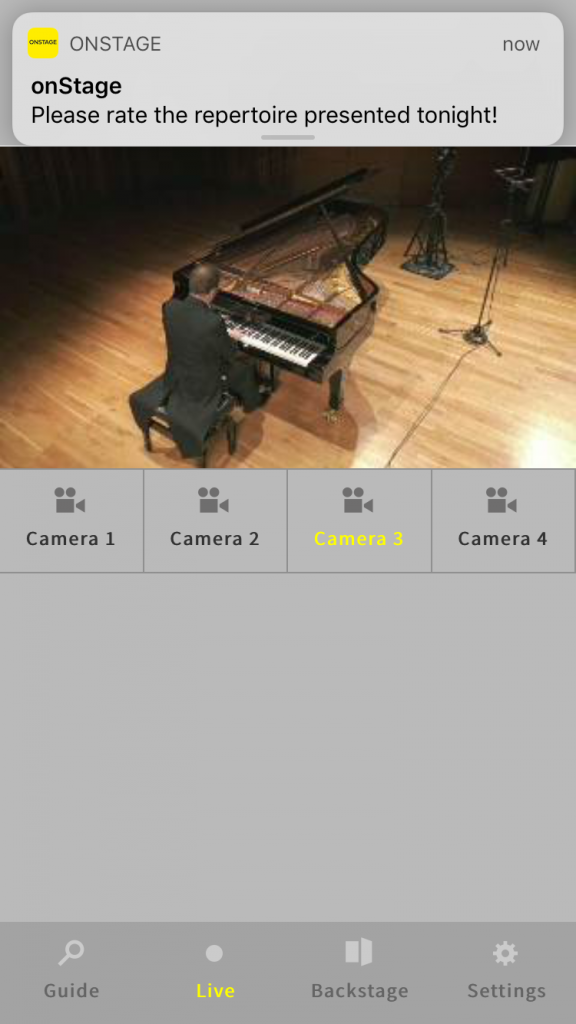 Switching from a camrecorder to another (taken during Classical:Next 2018) 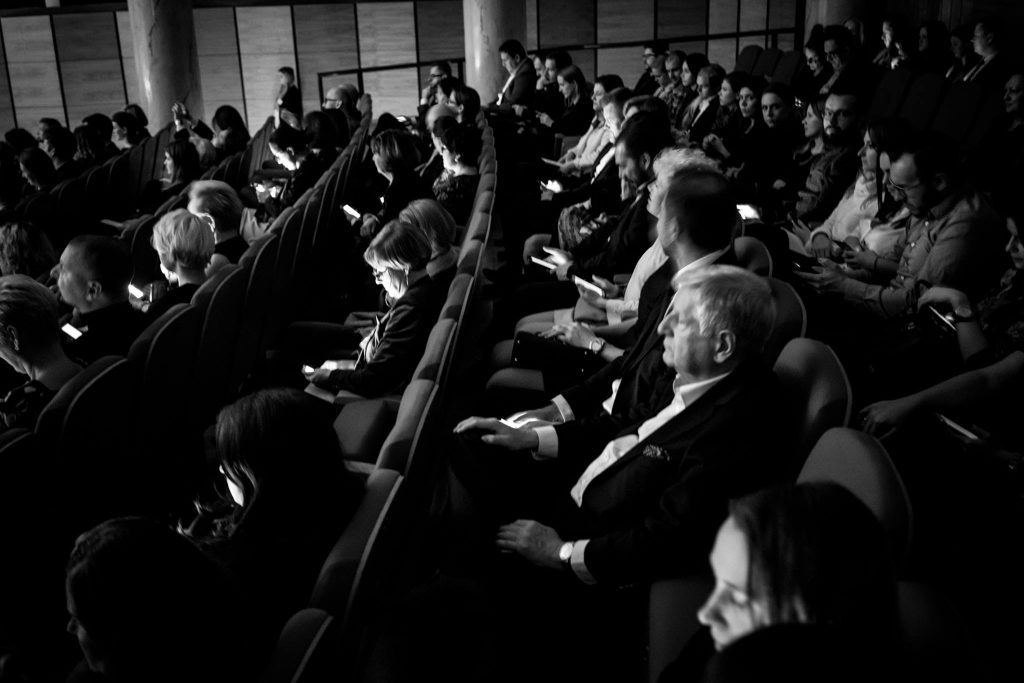 With onstage application, viewers can interact each others on the performance (Konrad Cwik / Julian Cochran Foundation) 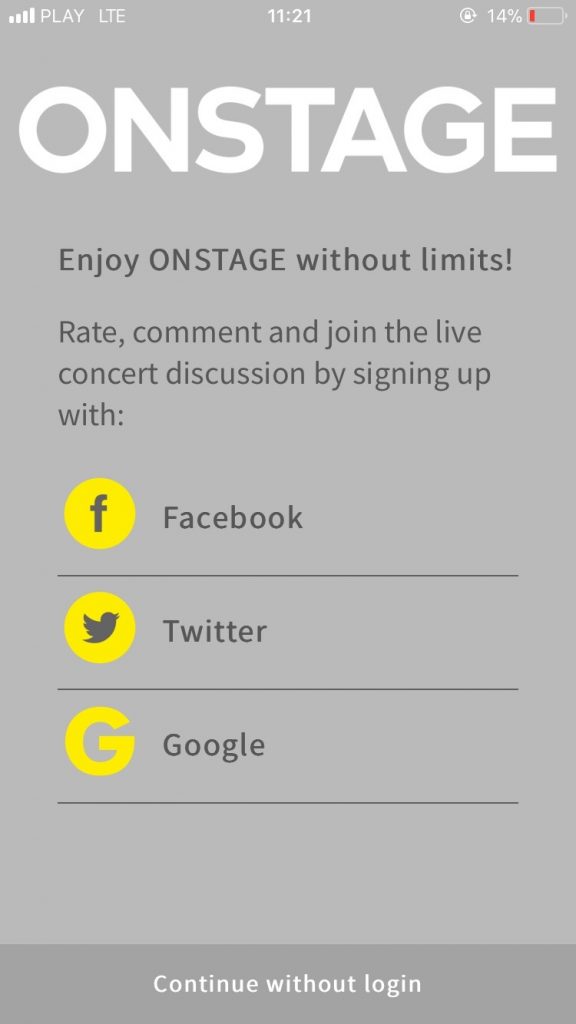 Onstage application enable to viewers to discuss during the performance

One can cry out heresy or scandal. However, a few centuries ago, it was common to see viewers talking to each other not only in the gods (paradise) and even to see viewers drinking or eating during a performance ! Have a look to this painting: none of the viewers neither pay attention to the stage nor look at the same direction. more interesting to Survey the other viewers they may know ! 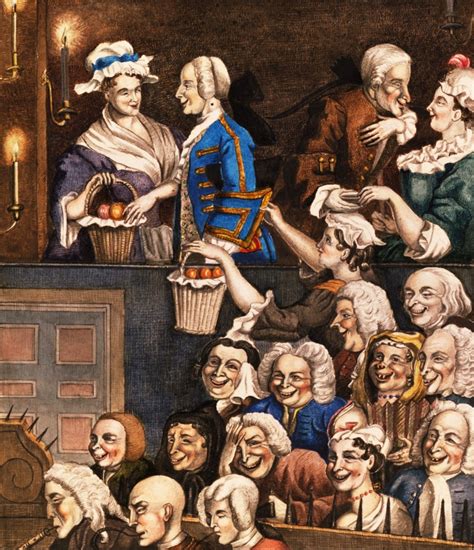 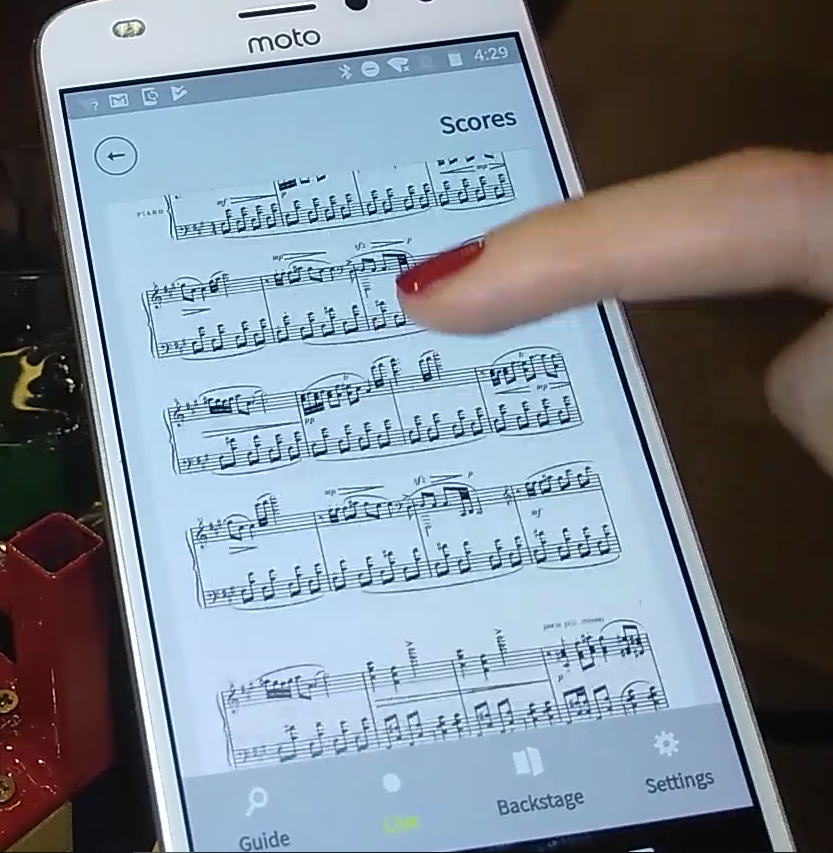 Following the score during the performance  (konrad Cwik/Julian Cochran Foundation) 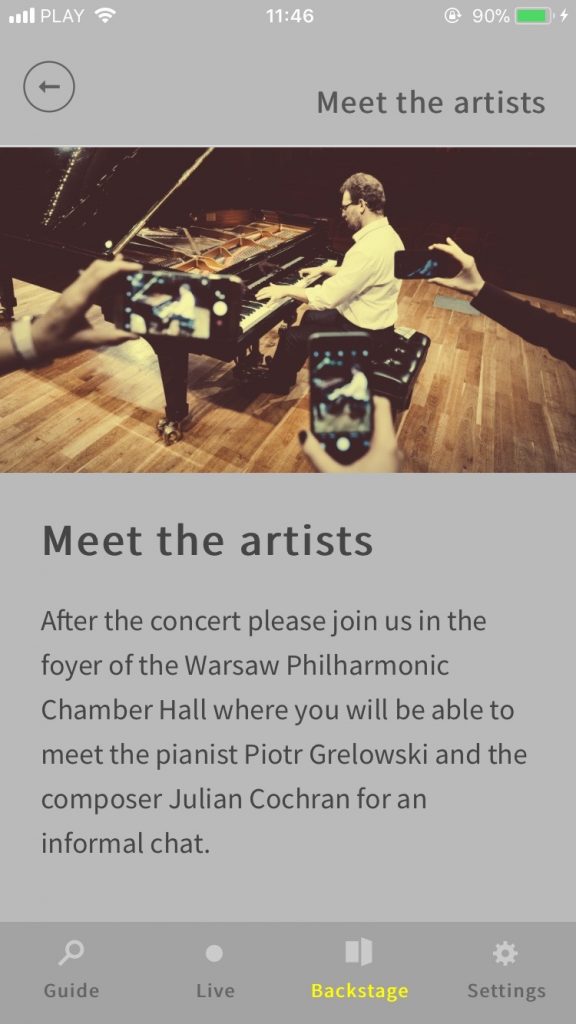 Onstage application connects the viewers with the artists after the performance

It seems that the onestage application has been used up to now only in concerts  performed in Poland and his only available in Polish version.
The Onstage application was first premiered in the Warsaw Philharmonic orchestra after one year of preparations in 16 November 2017 for the piano Recital of Piotr Grelowski who won the International Cochran Piano Competition in 2016.
The onstage application has also fueled a classical music concert in last 28 April  2018 in the Concert Studio of the Polish Radio in Mokotów a district of Warsaw. 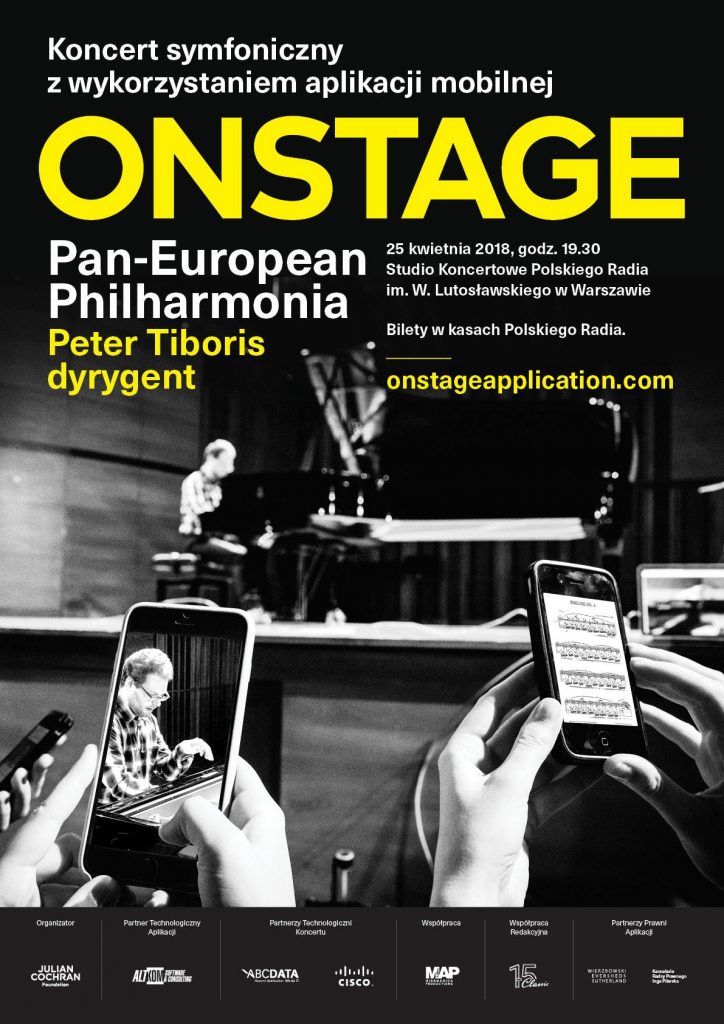 Anyway, if you want to feel what can be the experience, feel free to watch this little video demo I have made during Classical:Next 2018. You can see for instance how you can swich from one camrecorder to another or you can follow the score during the performance.

Onstage application : another innovative project of the Julian Cochran Foundation

“onestage application : eyes on the stage but glances at the smartphone !” by Ramzi SAIDANI is under terms and conditions of the licence Creative Commons Attribution 3.0 France