Social medias matter in the Opera houses in the World

Social networks have started being a key component of communication strategy of opera houses in the World. Facebook, Twitter or Youtube are now commonly used by these cultural institutions. Instagram and Pinterest tend also to be more and more often adopted. Regarding Facebook and Twitter, I had made in 2014 a post showing how important some opera houses fans communities were.  Besides the institutions, the most famous artists of the lyric art still can be proud of large facebook communities. Some of them have even larger fanbases than the opera houses where they sing !

Opera singers on facebook : who has the largest fan community ?

The top 3 have remained unchanged ! There are opera houses located in english speaking countries (respectively Australia, United State and Great-Britain). The iconic Sydney opera house still leads. Follow the Metropolitan opera house (New York and everywhere now in the movie theatres) and the Royal Opera House aka Covent Garden in London. The Royal Opera house is catching the bridge with The Met. 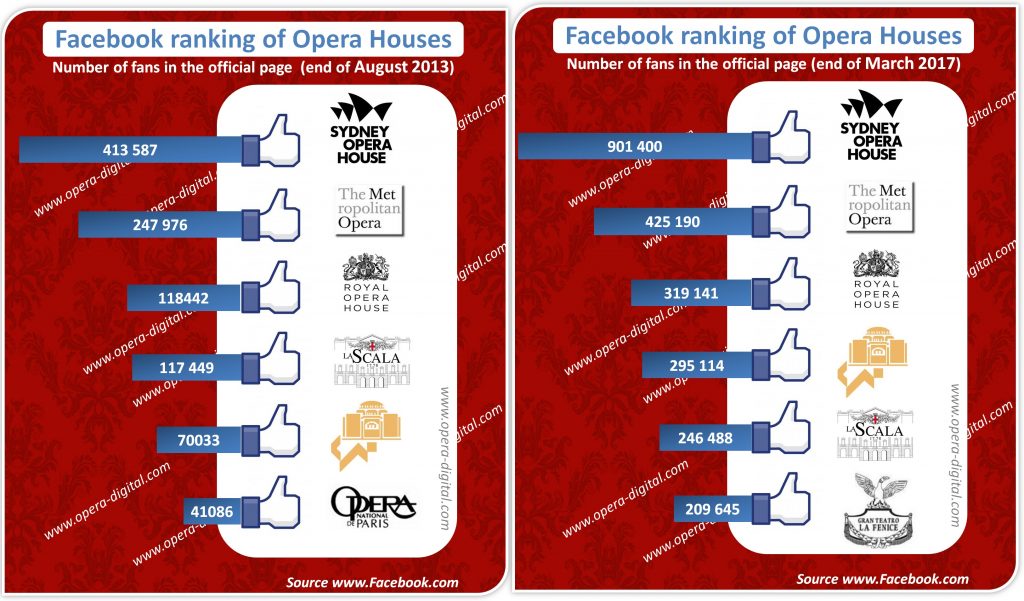 The big surprise for me was to see that the Cairo Opera House (yes there are opera houses in Arabic and Muslim countries 🙂 has become number 4. The worlwide known La Scala di Milano still remains in a good position (#5). Surprising! However it must be acknowledged that Cairo Opera as well as Sydney Opera have some kind of “Opera Agora” positionning. Both propose performances of operas, ballets and classical music concert but also a large programming of traditional or modern music. They also boosts a marketed offer of restaurants and quite mass-market exhibitions, etc…
Italia can find consolation thanx to the Venice’s Opera House (La Fenice). La Fenice has got the 6th position occupied 3 years ago by the Opera de Paris. The French opera house has fallen to the 8th position behind the Buenos Aires Opera House (Teatro Colon)!

Woud be interesting to see if this ranking of the opera houses in the World is the same on Twitter ! Stay tuned to know it !

“Opera Houses in the World : Top 5 largest facebook fanpages” by Ramzi SAIDANI is under terms and conditions of the licence Creative Commons Attribution 3.0 France