There’s some opera on Spotify

I have just opened my free Spotify account and thus I spent a little time on that streaming music platform. I immediately thought about opera on spotify and I had the idea of comparing the presence of some of my favorite sopranos on that service.  So I have searched for Cecilia Bartoli, Anna Netrebko, Edita Gruberova Angela Gheorghiu, Maria Callas, Renata Tebaldi, Dame Kiri te Kanawa, Dame Joan Sutherland, Mady Mesplé and Victoria de Los Angeles.

Some of my favorite opera divas

I was eager to see who has the larger audience on that service.  I thus watched who was the diva who had the most listened track!

The search led to both expected and surprising results!

Unsurprisingly Maria Callas leads! Her version of “O mio babbino caro,” the famous aria excerpt from Puccini’s Gianni Schicchi, is to date the most listened to on Spotify among those sung by Maria Callas title. It has been listened more than 834K. The second one for Callas is Casta Diva 🙂

Duet of flowers ranks very well! Because it is included in the Classical Selection of  the author of 50 Shages of Grey (http://www.eljamesauthor.com/gallery/soundtracks/),  French Soprano Mady Mesplé  (with Danielle Millet) rocks! Another version with Dame Kiri Te Kanawa (with Katherine Jenkins) has also more than 400 000 listenings. 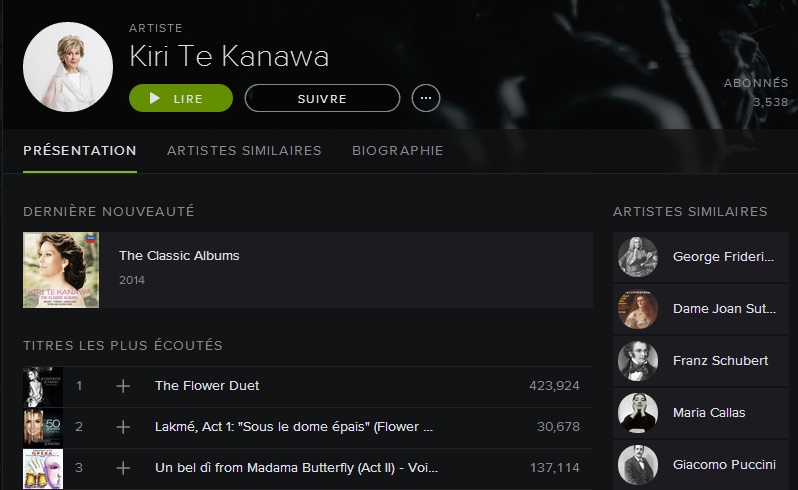 Dame Sutherland has a good position thank to a track from la Traviata (Il Libiamo with Pavarotti); It was listened more than 460 000 times. 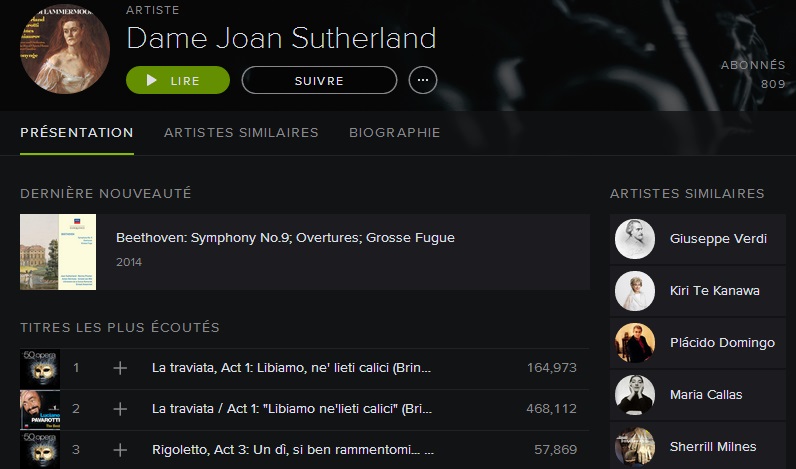 Opera on Spotify for the newer generations

Among the current stars of the opera world (Bartoli, Netrebko, Gheorghiu) the numbers of tracks do not reach such heights. Thus, Cecilia Bartoli capped at 189 000 tracks (“Sposa his Disperata”), Anna Netrebko at 98,000 (“Libiamo” from La Traviata with Rolando Villazon), Angela Gheorghiu with his ex husband ranks well with circa 92000 for Act I Tosca Duet (Mario, Mario/Son Qui) 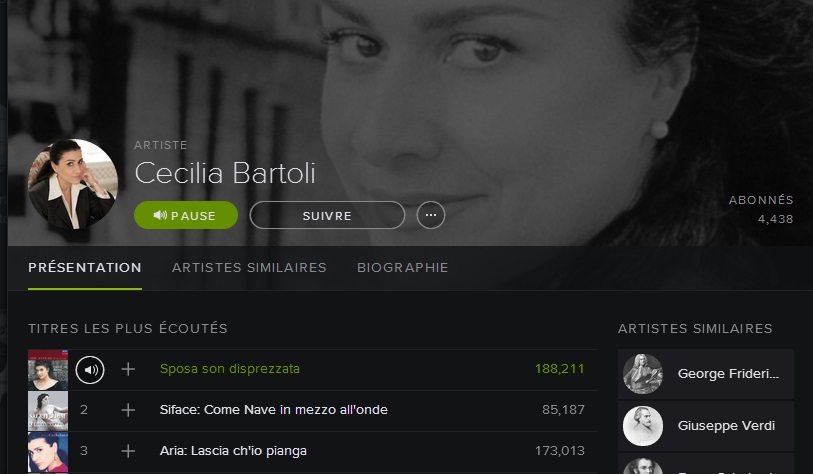 Another key result of this quick search, is how strong Puccini is! Verdi comes after! I must admit than Puccini reign over opera audience on spotify ! Puccini often appears in top of main Sopranos and O Mio Babbino caro is a must-have This aria is amongst the first three tracks in terms of audience for Renata Tebaldi, Maria Callas, Anna Netrebko, Victoria de los Angeles!

“Opera on Spotify : which diva has the most listened title ?” by Ramzi SAIDANI is under terms and conditions of thelicence Creative Commons Attribution 3.0 France